Each year, me and my wife Hazel have decided to help a different CHARITY, by donating 25p every goal we see at the matches we attend.
Over the years, people and clubs from as far as Coxhoe in Durham down to Penzance in Cornwall have donated as we have visited the grounds and we have raised over £3,500 in the 4 seasons we have run the Charity Blog. As you can see from the Photo above, last season(2014-15) we raised £1325.00 for Support Dogs.

During the 2015-16 season, we are supporting 2 worthy causes

Both Charities aid homeless people and people with mental issues and vulnerable adults.So if you would
like to make a donation(no matter how small) and
you see me at a match, please come up to me or Hazel, we would be very grateful. All Donators will get a mention on the blog and the running total is on the left hand side. 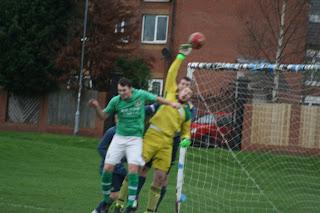 Been to Sutton Lawns many times in the past to take Shawn to the park, but never to watch a football match, so today that had to be put right..I was greeted near the changing rooms by Skegby Manager SimonPridmore.

Afc arrived late thinking it was a 2pm kick off and with it being a 1.30pm kick off, made the game late.

The game saw Clifton attacking with the wind to their backs, but it was the home side that had the first chance, when Jorden Coleman saw his shot go wide of the target. After 12 minutes, the visitors had a short corner on the right side and CONNOR BOULTON crossed in to the box, but the wind took the swerling ball over the keepers head in to the net.

Clifton pressed forward  and Skegby did well to contain them as the wind played its part, to credit to both sides they both tried to play good decent football on the ground.

On 65 minutes, BEN LORD received the ball 25 yards out and lashed the ball forward and it dipped over the keeper to level up the scores.

As we kicked off late, the referee was very concerned about the game ending as we entered extra time and offered both teams 10 minutes each way but Skegby wished to play the 15 minute each way and if abandoned then the game would have to start all over again next Saturday.

100 minutes in to the game and CONNOR BOULTON hit a corner kick from the right and it ended up in the net to give them a 2-1 lead.

With light fading, with two minutes remaining, the visitors broke away and CONNOR BOULTON completed his hat trick and send AFC Clifton in to the Quarter Finals where they have earnt a home tie against Bilsthorpe Reserves.

Photos from the game can be seen HERE

Finally must comment how I thought how well the ref handled todays match.

*** PLEASE Read about the upcoming NOTTS SENIOR LEAGUE GROUNDHOP...Advanced tickets are now on sale****** Just click on this LINK